A Night Aboard the RMS Queen Mary

I am so excited to share this post with you.  Last week I was on a mini vacation with my family.  We took a three night cruise from Long Beach, California down to Ensenada, Mexico.  We decided to spent the night before the cruise aboard the stately Queen Mary which is permanently docked in Long Beach.

If traffic is good, we are less than an hour away from this beautiful ship.  The cruise terminal is right next door to the Queen Mary and a very short walk away.  I had heard a few stories about this ship which is now a floating hotel.  Some people said it was like an old outdated hotel, but to me it was an evening being transported back in time (obviously, they didn't appreciate history). 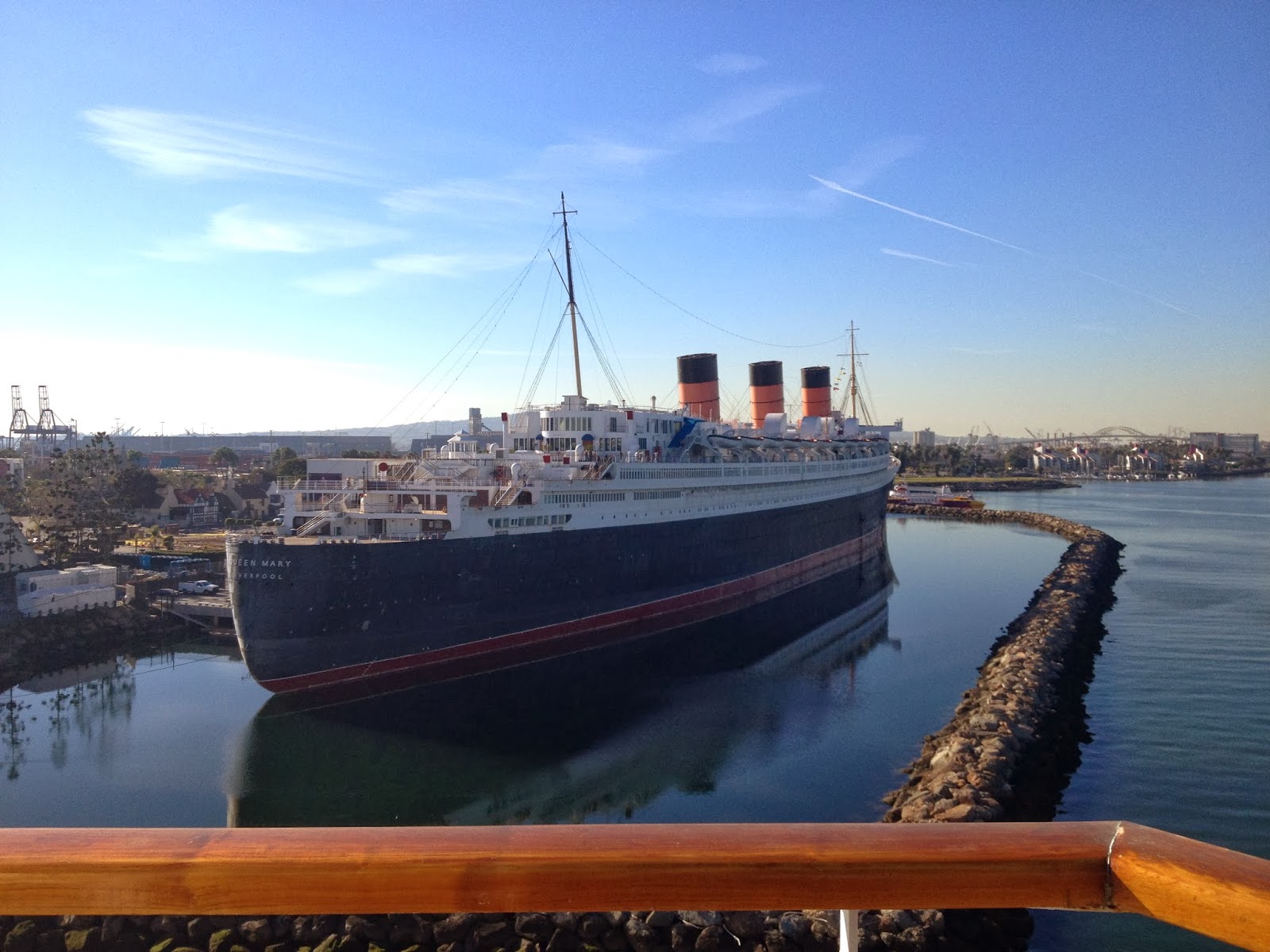 The Queen Mary was built in Scotland for the Cunard White Star Line and christened in 1936.  When the ship was retired in 1967, she was purchased by the City of Long Beach.  Since then she has been permanently docked at Long Beach. 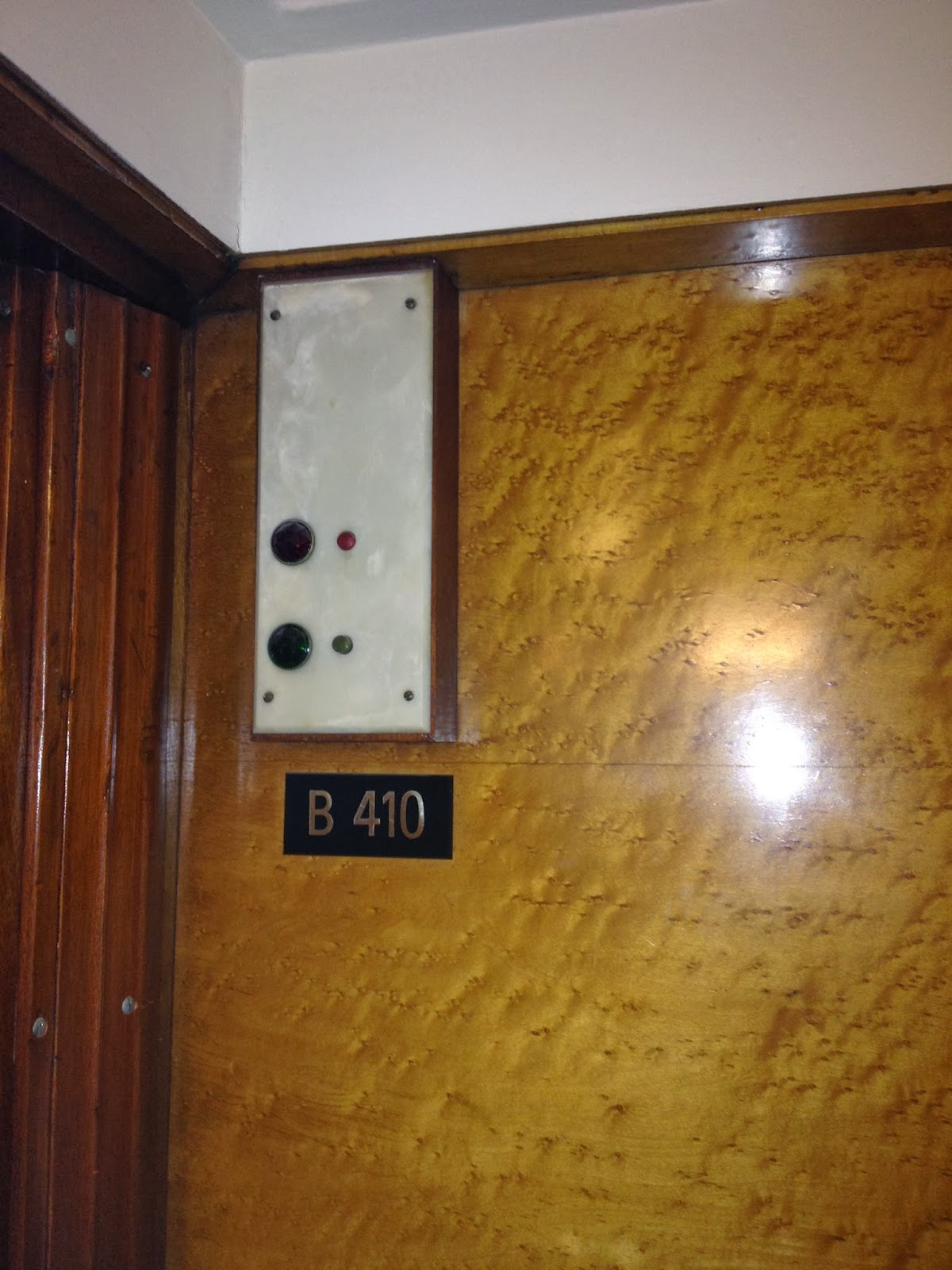 We stayed on Deck B of the ship.  According to the historian on board, Deck B (and Deck M) would have been first class cabins.  These cabins had a steward and housekeeper and the picture above shows the buttons outside your cabin door that would light up when you called your steward/housekeeper. 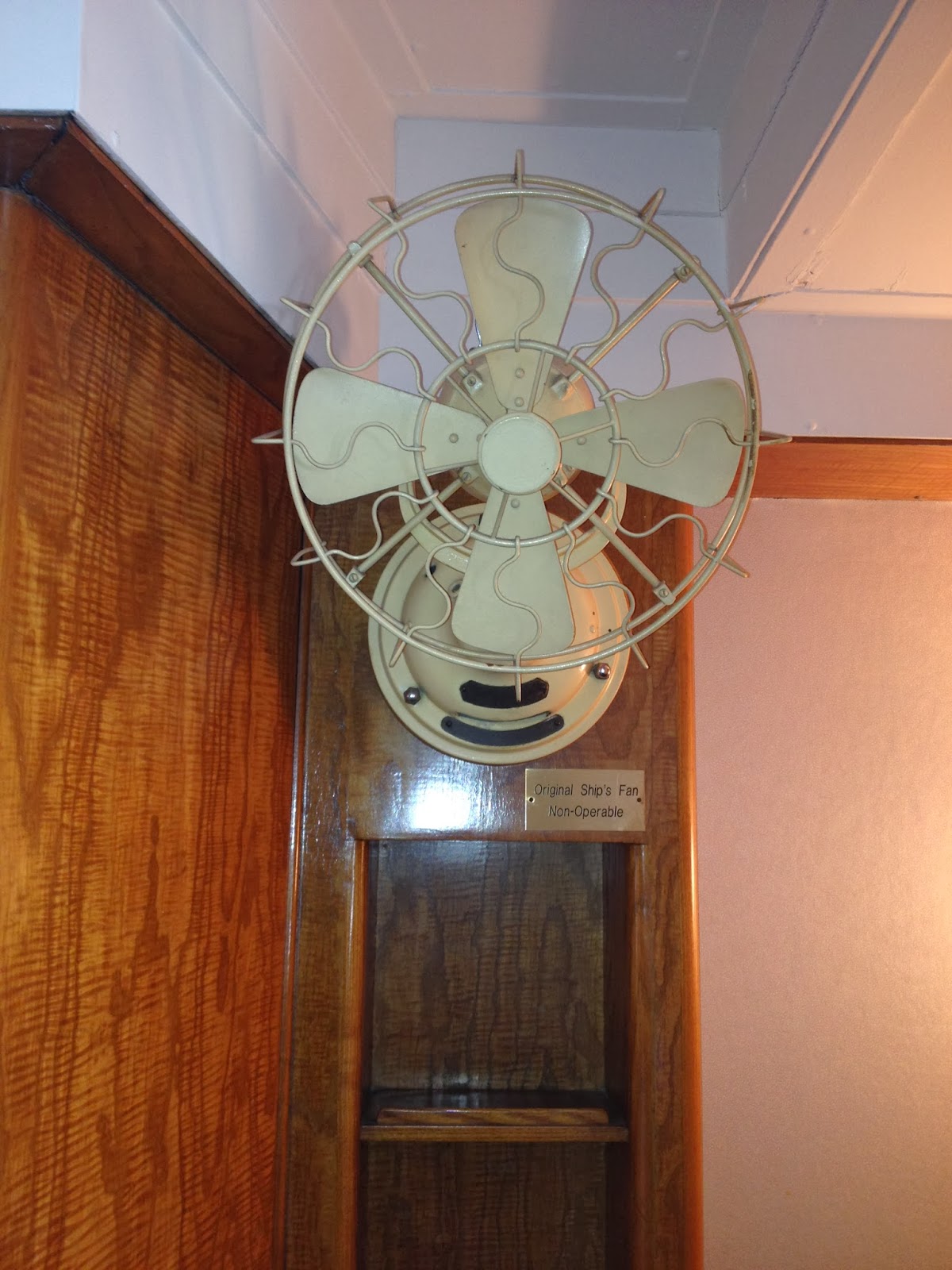 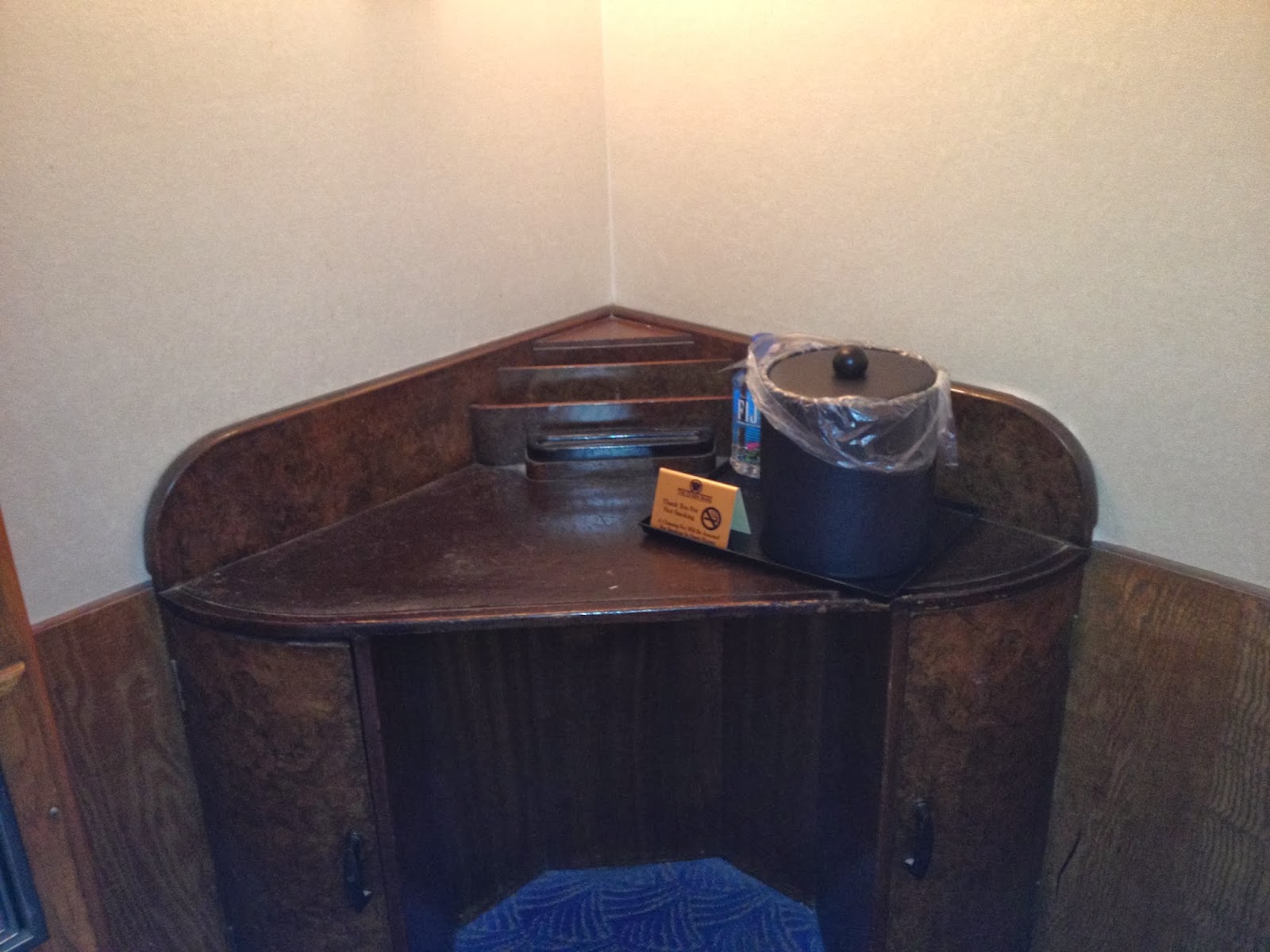 Can't you just image the stately ladies and gentlemen sitting at this desk and writing their correspondence on a long sea voyage?

Our cabin was almost in original condition.  My daughter and her family stayed in a cabin that had been modernized.  I was so happy that I got to stay in cabin that was still intact.  Talking about intact, here's some some photos of the bathroom's modern plumbing (just kidding): 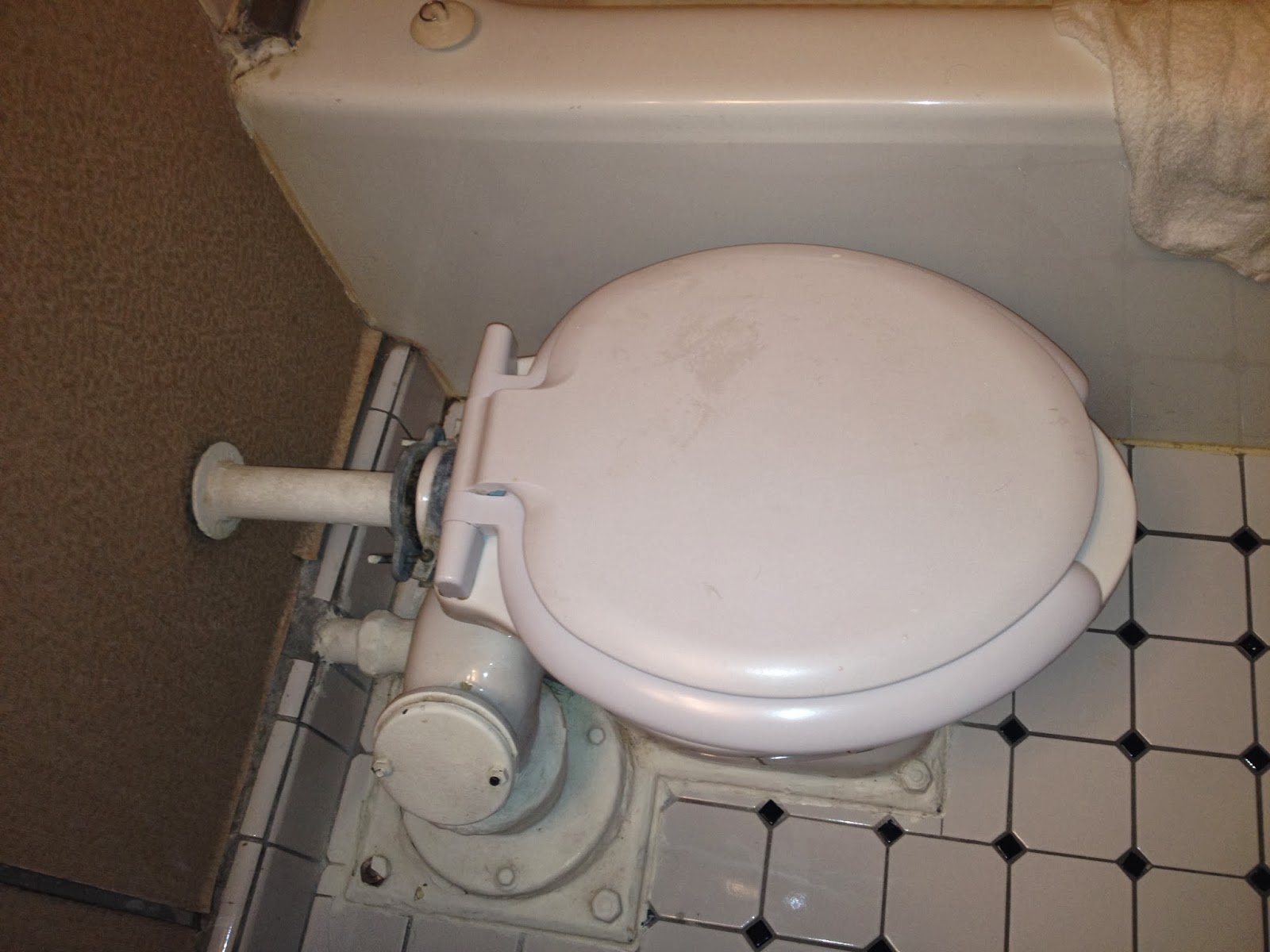 And here's the toilet lever that is attached to the wall: 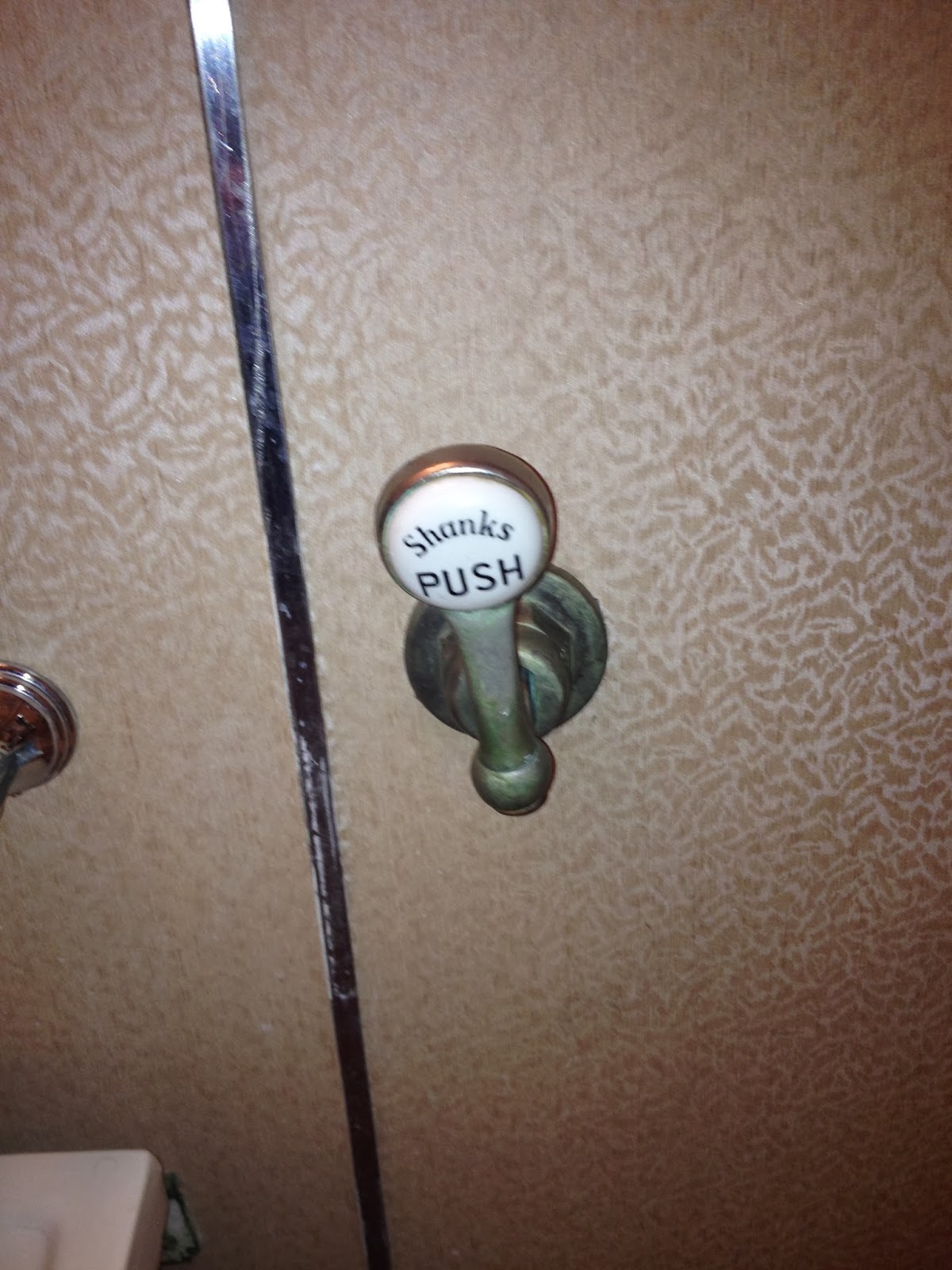 I'm surprised that this still works.  It sure isn't in code with California's water conservation but it was so much fun to see this contraption. After doing some research, I found out that Shanks company was based in Scotland.  The sink was also from Shanks. 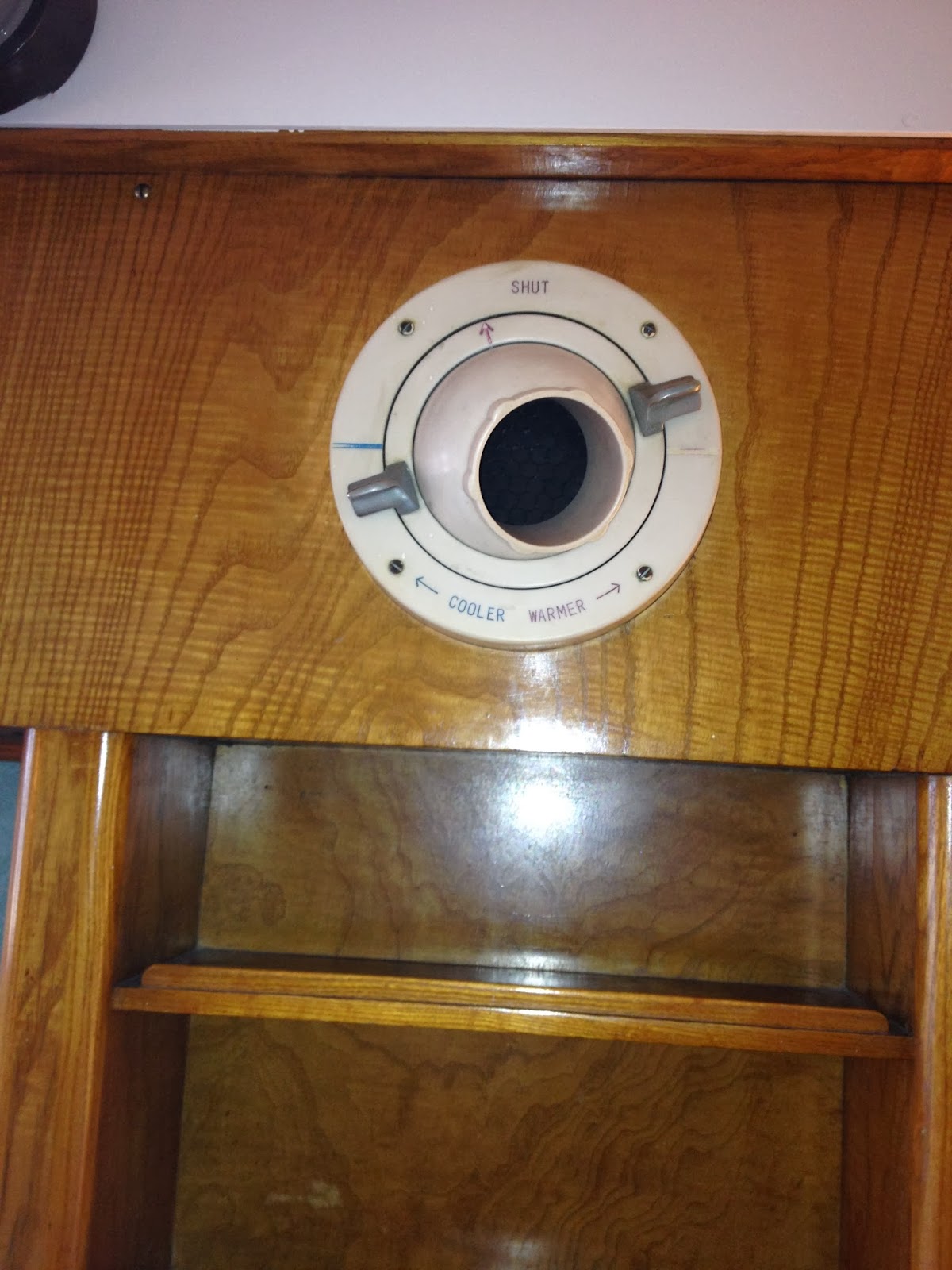 The picture above is for the heating and cooling in the cabin. There were three of these units in our cabin.  From what I read, during the sea voyage if you turned the unit to "warmer" you would get air piped in from the boiler room. If you turned it to "cooler" you would get sea air.  Unfortunately, we only got tepid air from these units.  Luckily, we were able to open the two port hole windows in our cabin to allow some fresh air into our cabin.

Here's a photo of the "electric heater" original to the cabin.  The Cunard White Line incorporated these heaters into the plan of the ship to accommodate the North American passengers who were used to warm homes. 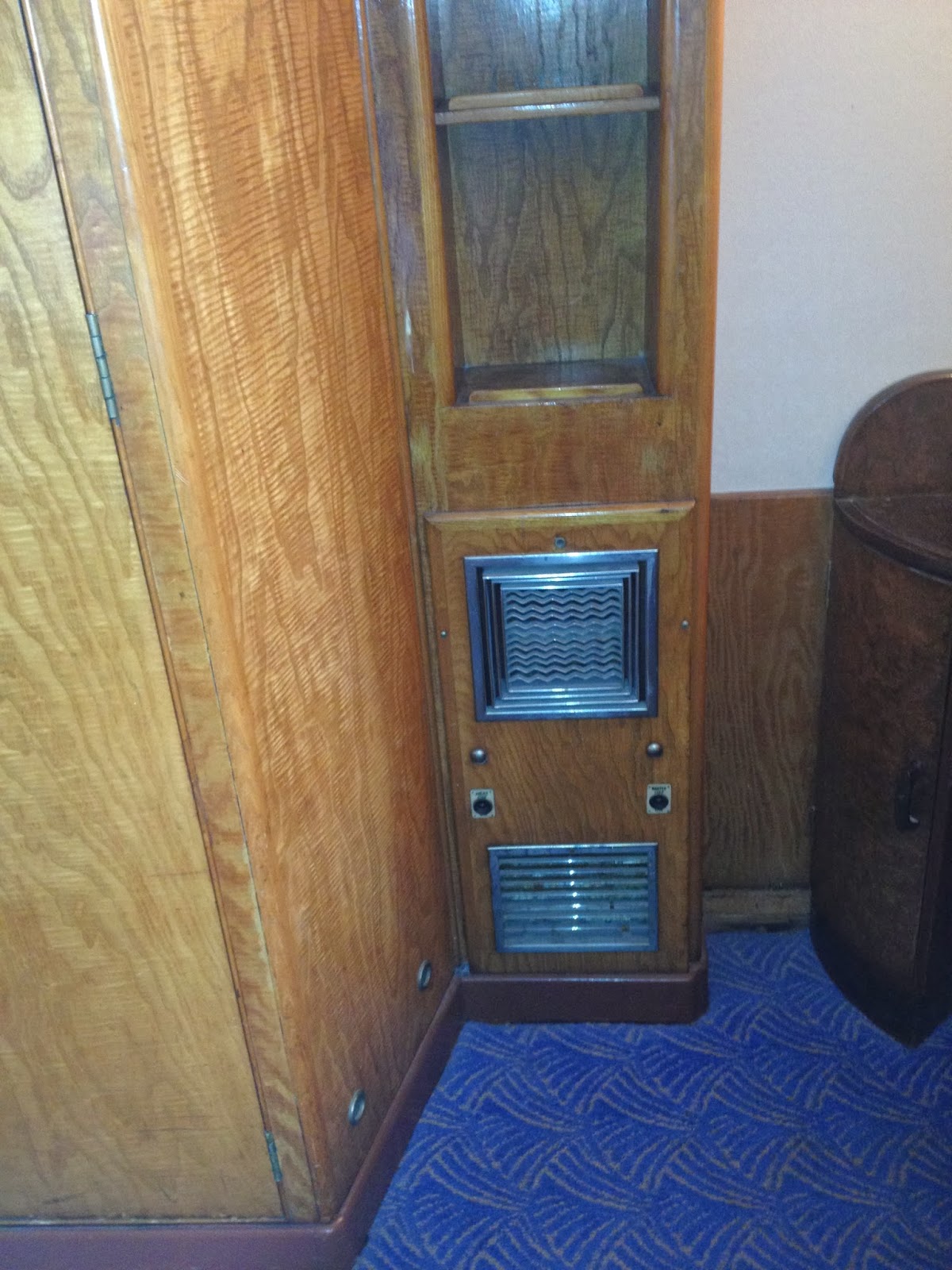 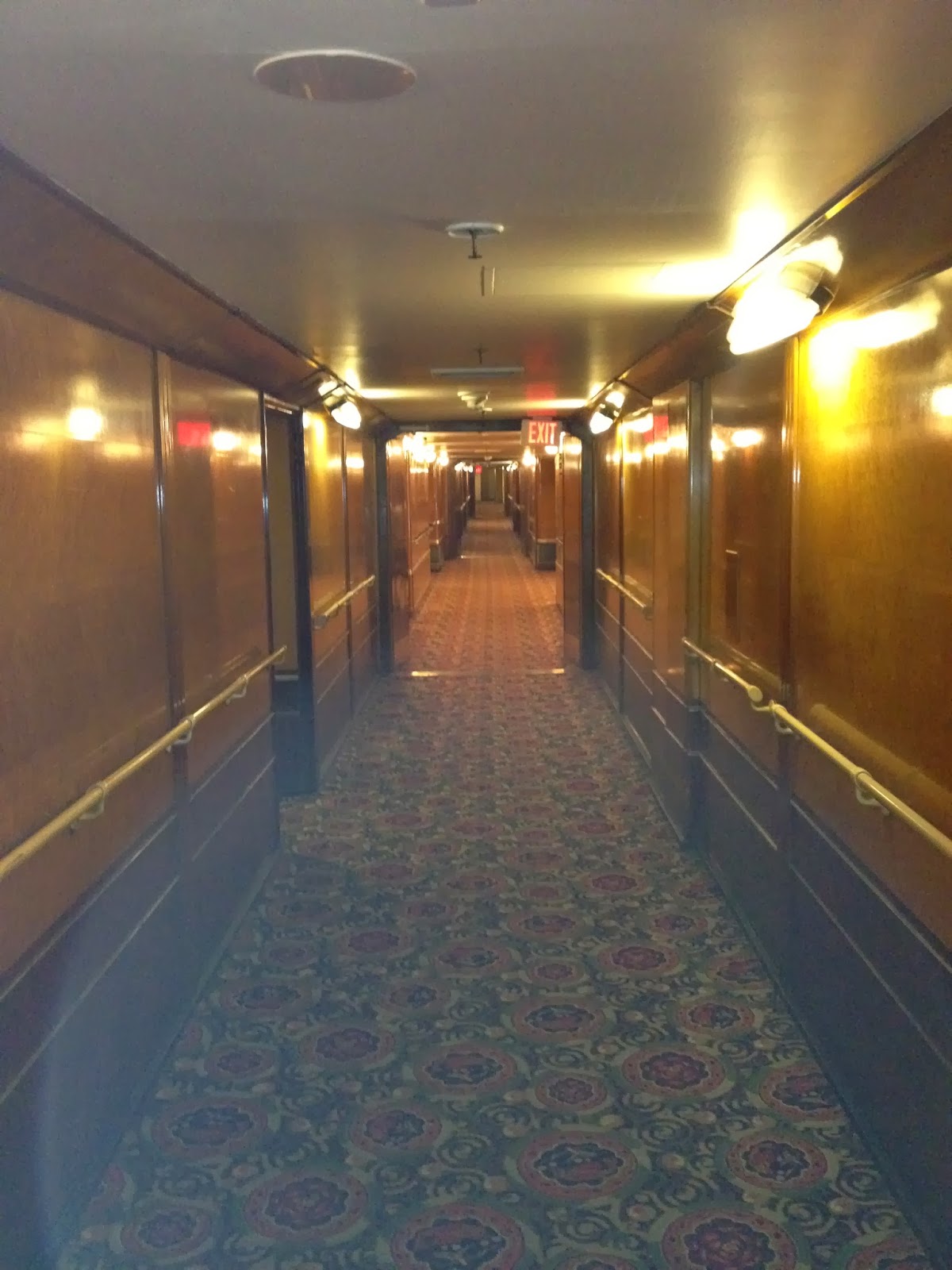 Above is a view of the hallway of Deck M on the ship.  The walls throughout the ship are lined with birds eye maple; beautiful wood that is still intact and in beautiful condition.  It was quite amazing at how large this ship was for it's time.  In fact, our cabin was larger than the balcony cabins we sail on now. (See paragraph at end of post for dimensions of the Queen Mary) 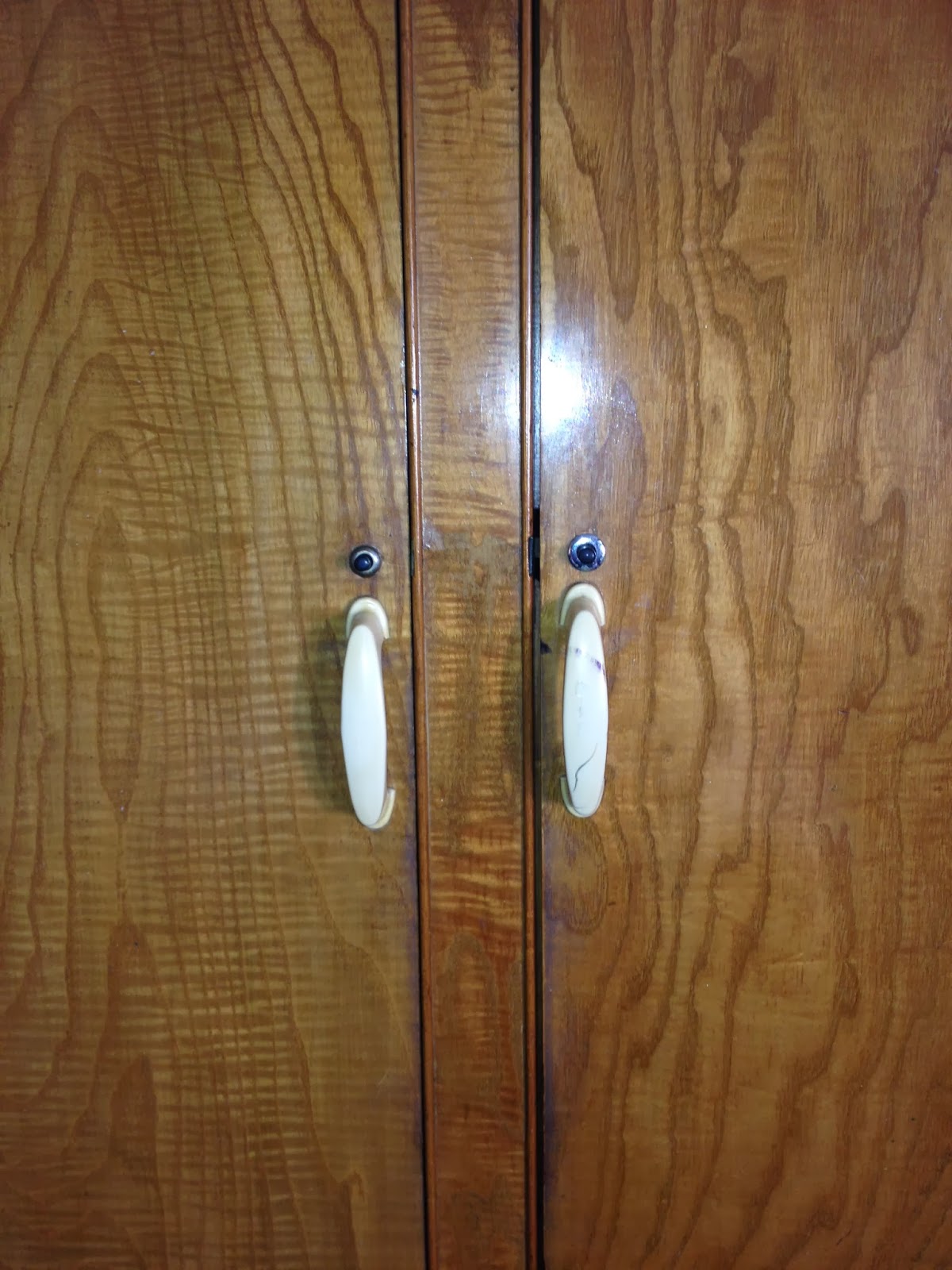 We took a tour of the ship and saw some of the rooms not open to the public.  One of these was the First Class pool.  It's in the middle of the ship, below deck.  It was eerie to go in there at night and see the lights shining on an empty pool.  The pool today is not usable since the depth of the pool starts at six feet and goes to 12 feet.

One of my favorites was to walk along the promenade deck.  Sorry that I don't have a picture of the teak flooring that's still intact.  I could just see in my mind those ladies and gentlemen sitting on the lounge chairs breathing in the salty sea air.

I forgot to say that my first impression of walking into the Queen Mary is literally like going back in time.  The beautiful woods and the art deco design really stands out.  There is a lovely observation bar that serves a great happy hour too.  If you are a fan of Mystery on PBS and watch Poirot, then you will love visiting the Queen Mary.  It's right in the same period of time.  The ship carried many famous people and royalty across the long ocean voyage.  It was so nostalgic and I thoroughly enjoyed my short time on board ship.

As I have mentioned, today the Queen Mary is a hotel.  To rate it as a hotel, then I would say it's good.  Our room had high quality hotel bedding and since no smoking is allowed, the room smelled fresh.  But, if you don't like old plumbing fixtures, fans that don't work and no air conditioning, then maybe it's not the hotel for you.  (My husband thought we were a bit nuts to want to stay here!)  But, I thoroughly enjoyed my time and would go back again in a flash. 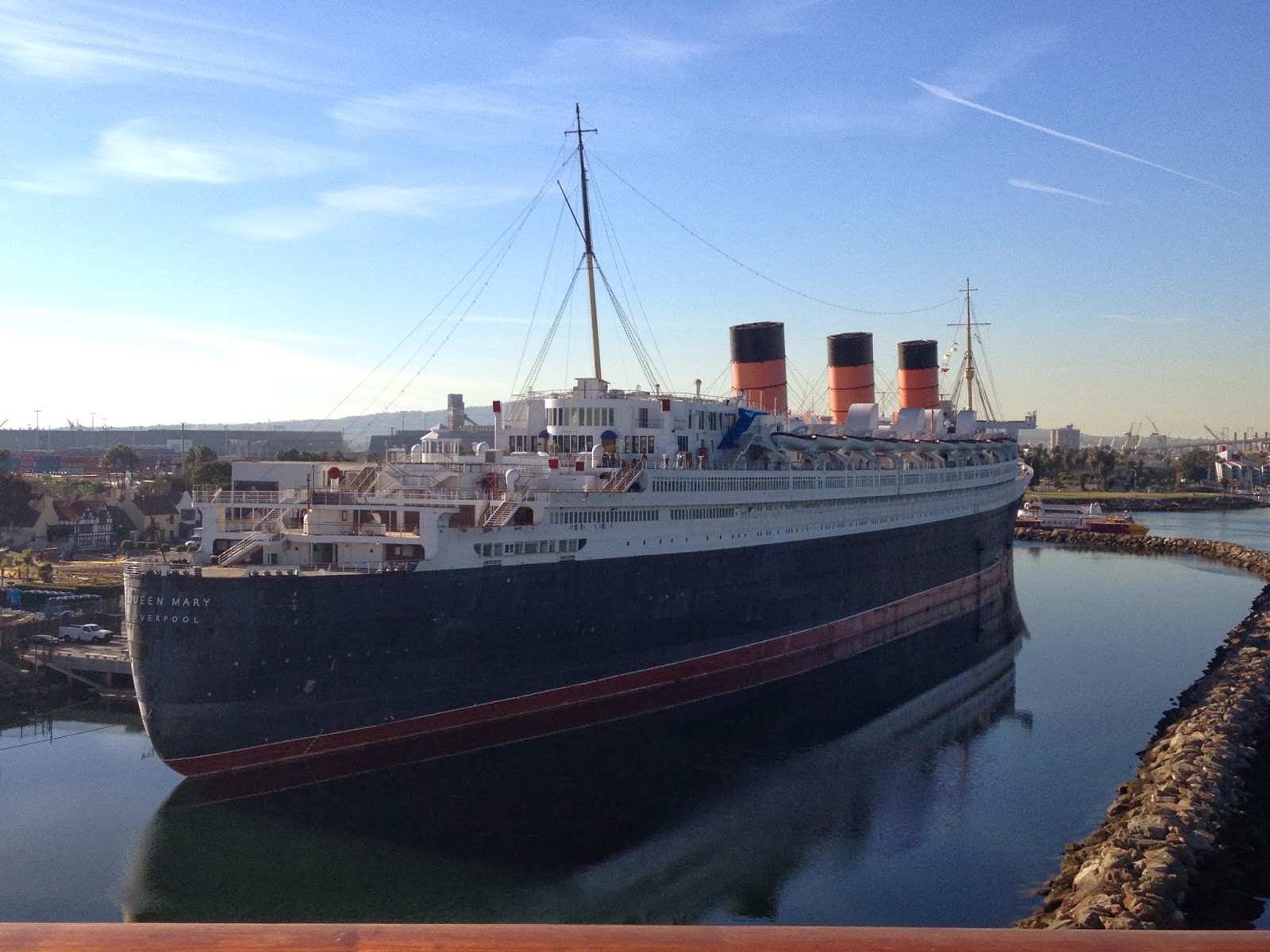 I look at these numbers and I am amazed at the size of this ship for it's day.  And, the Queen Mary did a tremendous job of transporting the troops during World War II.  She was known as "The Grey Ghost" and carried more than 800,000 troops!

That's about all  I have to share today.  Sorry that I don't have anything "crafty" to share with you this week.  I did knit two different toddler sweaters that I can share in the next weeks.  They are a fun and fast pattern.  Which reminds me, do stop by Handmade Monday and check out some great ideas.

Have a wonderful week,

Email ThisBlogThis!Share to TwitterShare to FacebookShare to Pinterest
Labels: travel

Hi everyone.  I hope your New Year is off to a great start!  Sorry that I haven't written for awhile.  I sometimes run of ideas but today I will share with you a scarf that I just finished for a dear friend.

It's a lacy leaf scarf and the pattern is pretty simple.  It's a great starter project if you're a beginner to lace knitting. 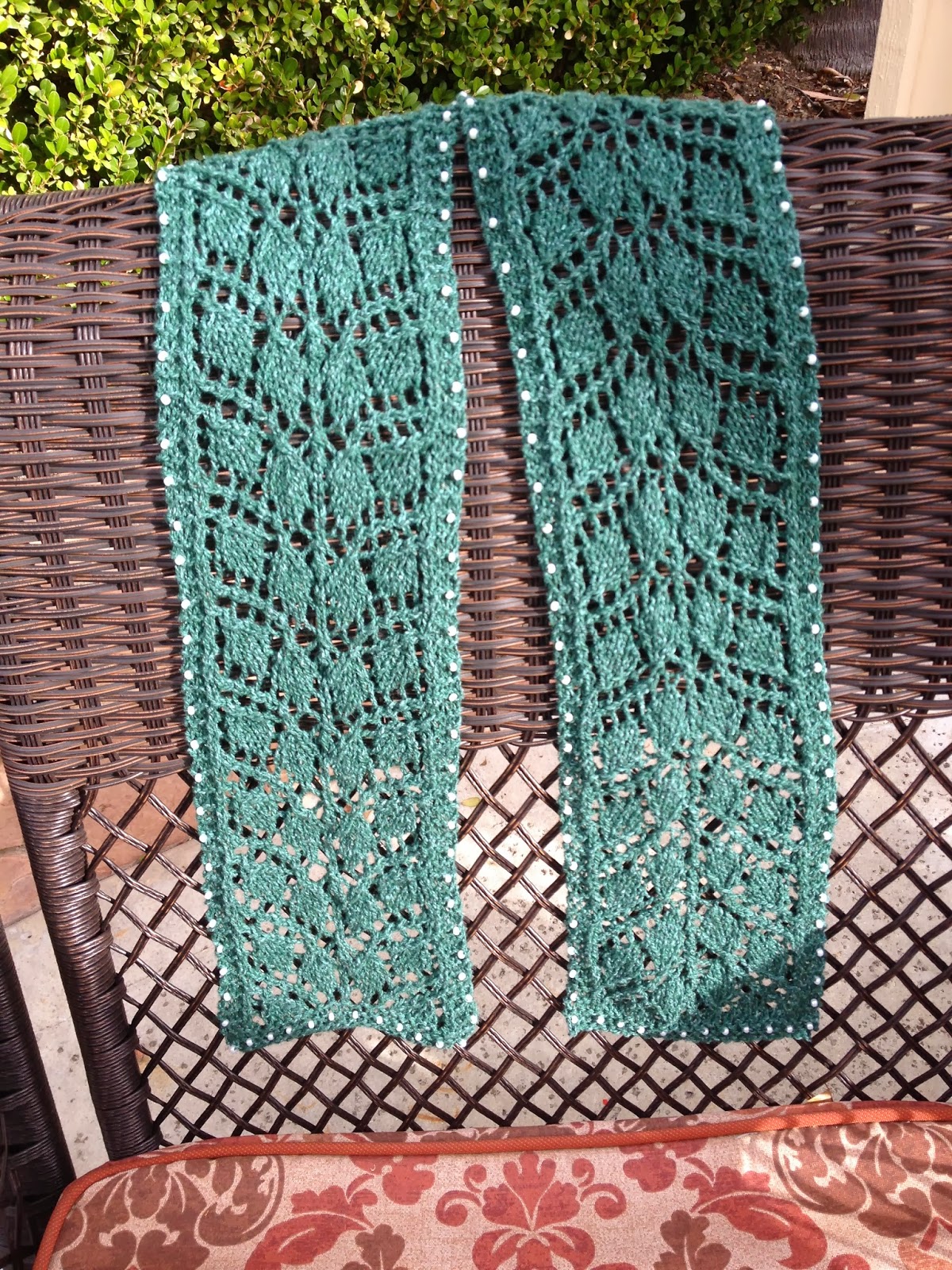 The scarf used one skein of  Elsebeth Lavold Silky Wool Yarn in Hunters Green 52.  I added some mint green Czech glass beads to the border of the scarf to dress it up a bit.  I used size 8 knitting needles. 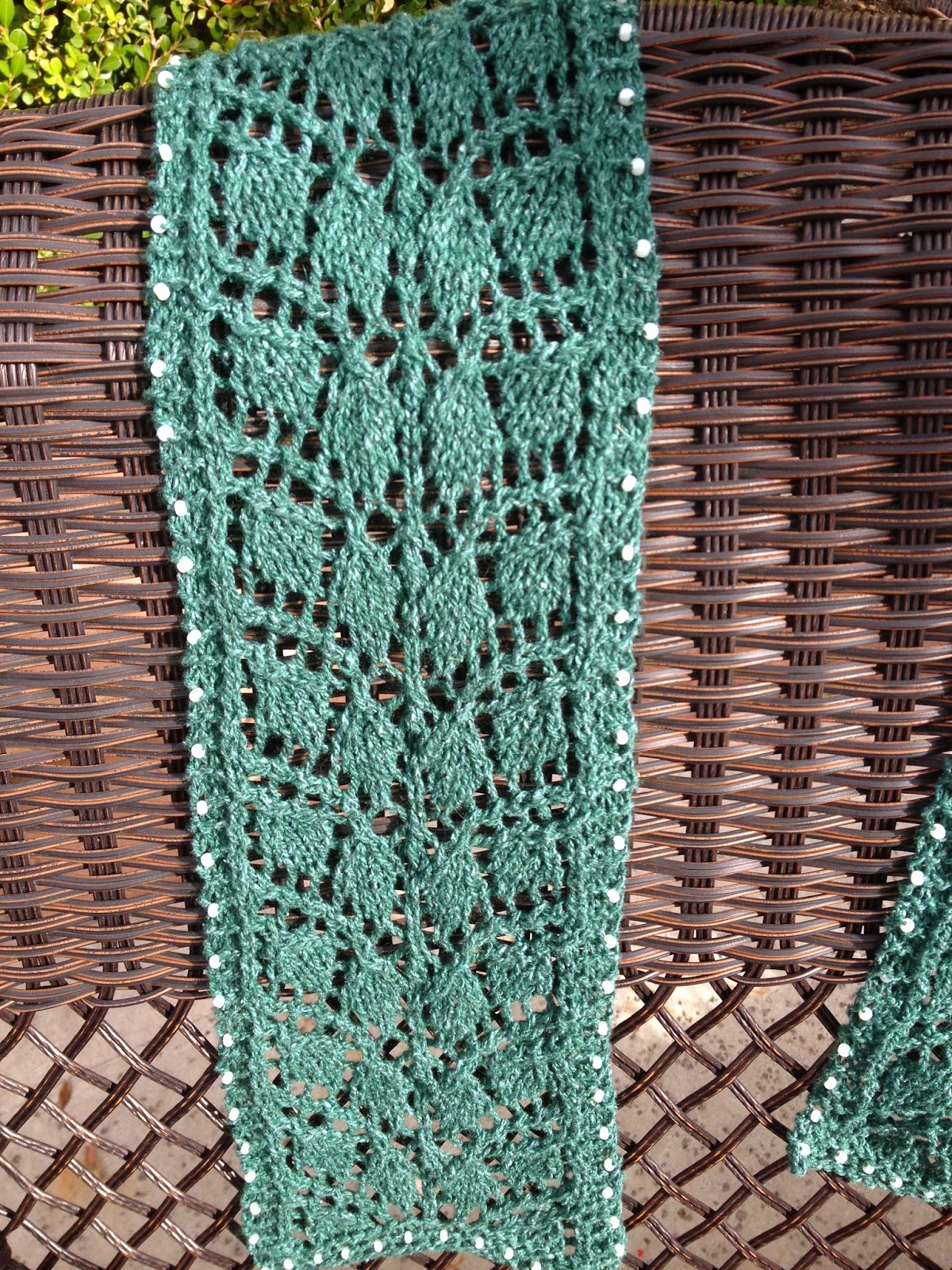 The yarn is just the right size so that the bead floats nicely on the yarn.  Here is the link to the pattern that I used.  I hope you will try this pattern as it was fun to knit.

As you may know, we have had a warm winter down here in Southern California.  That's good and not so good as we do need some rain.  Here's a picture of one of our Bird of Paradise flowers: 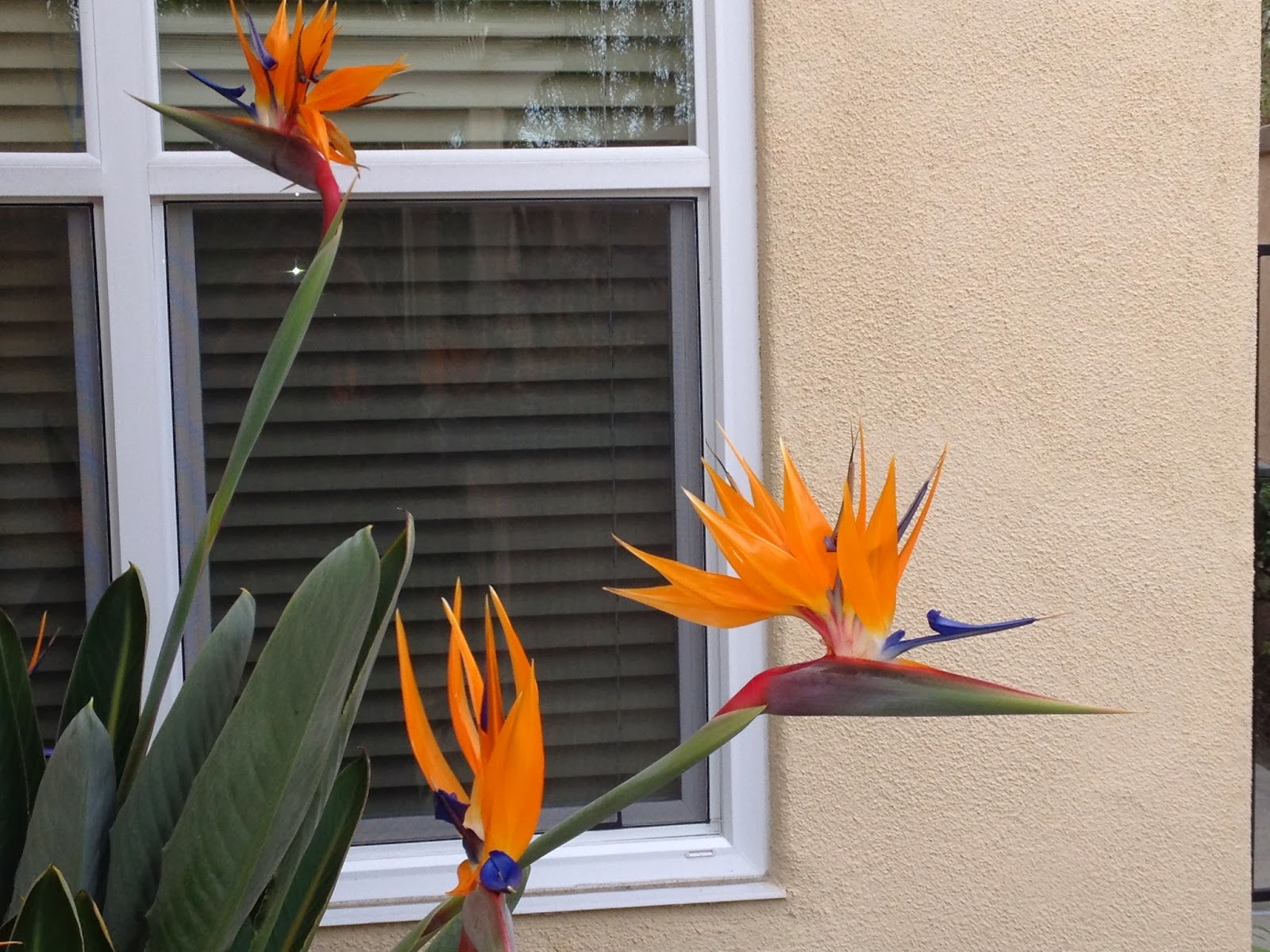 The flowers on it are absolutely huge and the plant itself is over 5 feet tall!

That's about all I have to share with you this week.  If you are looking for some great craft ideas, please stop by Handmade Monday

I wish you a wonderful week! 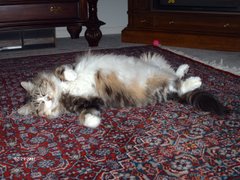